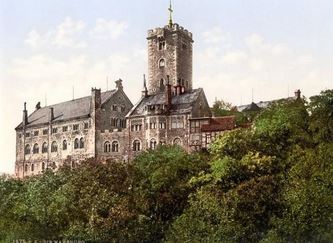 A mighty fortress is our God, a bulwark never failing; Our helper he amid the flood of mortal ills prevailing are the familiar opening words of Martin Luther’s great hymn, A Mighty Fortress. It was composed in 1527, which was a particularly difficult year for the Luther household because both Martin and his one-year-old son, Hans, suffered but survived extended illnesses, and then when the plague visited town, the Luthers made their home into a hospital. Making it through the challenging year may have reminded Luther of God’s faithfulness in the past when Frederick the Wise hid him in Wartburg Castle in 1521. Luther found the immense fortification to be a bulwark against agents of Emperor Charles V who sought to arrest him for heresy. Ein’ Feste Berg, the German title of the hymn, was not Luther’s first nor only hymn. His first hymn was A New Song Shall Here Be Begun, which he authored in memory of three Augustinian monks burned at the stake in Antwerp on July 1, 1523. The three were executed for failure to renounce their Protestant beliefs which they had learned primarily from Luther’s writings. In total, Luther composed thirty-eight hymns, six of which are included in the Trinity Hymnal, Revised, which is used by Fellowship Presbyterian Church. Martin Luther said of music that it “has the natural power of stimulating and arousing the souls of men.”

Martin Luther’s reforming work in Germany shows the great interest he had in the Bible’s book of Psalms. A Mighty Fortress is based on Psalm 46, his works published in English include five volumes of selected commentaries on the Psalms, and Psalms were often the passages used for his sermons, however, Luther did not believe the Psalms nor the entire Bible contained the only appropriate words for singing in worship. But moving from the German to the French-speaking branch of the Reformation under the leadership of John Calvin, congregational singing was also an important part of worship but the words used were limited to Scripture, almost exclusively from the book of Psalms, and they were sung a capella.

John Calvin and Martin Luther differed regarding what constituted appropriate verbal content for singing in worship, but one thing they agreed upon was an appreciation for Psalm 46. One of Calvin’s nine Psalms adapted for worship is the forty-sixth, so maybe the fortress struck both reformers as the best illustration of God’s care for his sheep, much like Jesus securing his sheep in the sheepcote in John 10. In the sixteenth century, the most substantial and intimidating structure for a secure home was a stone-fortified castle on the highest ground. In addition to his use of Psalms for singing, Calvin also adapted the Ten Commandments and the Song of Simeon (Luke 2:29-32). It is believed that the hymn, I Greet Thee, Who My Sure Redeemer Art, was written by Calvin and it is included in our hymnal. It may seem that I Greet Thee contradicts Calvin’s exclusive use of Scripture for singing in worship, but in more casual contexts outside of worship, he believed the singing of hymns was acceptable.

Even though Calvin wrote metrical versions of some Psalms and passages of Scripture, he preferred to have musicians working with him adapting additional Psalms and composing music. One of his musicians was Clément Marot who translated several Psalms and composed music for both the Strasbourg and Geneva Psalters. Another contributor to the Geneva Psalter was Louis Bourgeois who also composed three of the hymns included in our hymnal—197, 330, and 614. Also, the first selection in our hymnal, All People That on Earth Do Dwell, was authored by William Kethe in English with the music composed by Bourgeois for the Genevan Psalter.

The Reformation of worship in Geneva was an application of sola Scriptura to the verbal content of musical praise to God. Roman Catholicism almost exclusively used choirs or choruses singing in Latin during Mass, so the idea that worshippers could sing in their native French must have been unsettling or even intimidating to congregations influenced by the Reformation. As with so many aspects of Christian worship that were changed by the Reformation, worship in song had not been done that way for centuries, if ever. Calvin found himself with a problem getting people to sing, but he figured out a solution—the children of the church. The children were taught the tunes used with the Psalms, so just as they memorized their catechism they also memorized the words of the Psalms. One can imagine some of the children at home singing the Psalms while doing their chores or involved in other activities. If the children could learn to sing in worship, then so could their parents, grandparents, and other family members.

Today, congregational singing is an integral part of Protestant worship. Now 500 years since Luther posted his theses and nearly as many years since the Genevan Psalter, many Psalms, hymns, and spiritual songs have been added to the church music library. The importance of sola Scriptura for singing in worship is shown in the Trinity Hymnal used by our church. It includes ninety-one selections from an assortment of Psalters, other Scripture passages adapted for singing, hymns based on Bible passages or themes, and other selections that are consistent with Scripture as interpreted by the Westminster Standards. So, in the words of the Lord spoken in Psalm 98:4-6,

Make a joyful noise to the Lord, all the earth;

break forth into joyous song and sing praises!

Sing praises to the Lord with the lyre,

with the lyre and the sound of melody!

With trumpets and the sound of the horn

make a joyful noise before the King, the Lord!